How To Repair Water-Damaged Ceiling 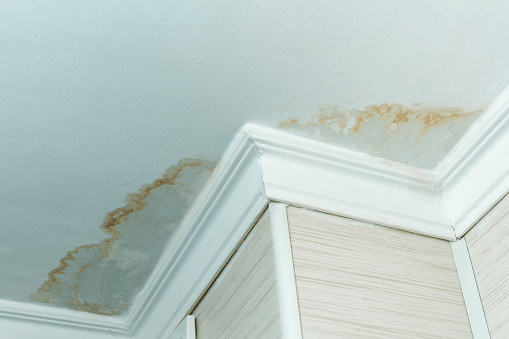 Ceilings inside our homes are vulnerable to water damage. This usually happens when leaks are coming from the roof or appliances situated near the ceiling. The result? A water damaged ceiling that you need to fix before causing further incidents in your home.

The last thing you want is a ceiling that is in danger of falling or poses a health hazard inside your house due to mold growth. You have to repair water damage from getting worse. Water leaking to the ceiling can easily damage the structure, especially the drywall inside.

To make your house safe, it’s best to remedy the ceiling once you notice that there is already damage due to the leaking water. But, how will you know the damage? Does it take days for you to notice them? Let’s find out.

How Long Does It Take for Water To Damage the Ceiling?

Water takes a slower time to damage the ceiling if it’s coming from a leak. Unless a strong typhoon has rummaged your roof down to the ceiling, the damage from leaking water may not show up immediately. Although various factors affect the time and severity of the water damage. This includes the volume of water, the source of the leak, and the integrity of the ceiling structure.

Minor leaks, especially in the case of smaller amounts of water, may not immediately damage the ceiling up until it’s three weeks already. A smaller volume of water can even take a longer time by around five weeks before the ceiling gets considerably damaged. Meanwhile, major leaks are easily noticeable and can damage your ceiling in as little as 24 hours from the start of the leak.

Once the water has already damaged the ceiling, you will notice various signs of damage on the ceiling. How to know if your ceiling has already been damaged by water? Let’s get to know the answers.

Signs Your Ceiling Has a Water Damage

Stains are one of the common signs that your ceiling is damaged by water already. It can either be yellow or brown. The stains on the ceiling from water damage have various causes. Leaks coming from the HVAC or plumbing fixtures could be one. Others can be due to roofing problems, resulting in visible stains on the ceiling.

The paint on your ceiling can also peel or crack. Sometimes, it may have a bubbling surface appearance. When there’s water leaking to your ceiling, it can go into the paint. This results in the paint peeling or having a blistering appearance.

Your ceiling can have sagging or drooping parts from the water damage. This can be dangerous as part of the ceiling could fall to the ground at any moment. Water makes the drywall or the ceiling material lessen its integrity. The structure becomes weak, especially if the water has been continuously leaking on for quite some time.
Musty Odor
Water damage can cause a musty odor due to the collection of water mixed with deposits of mold growth and other dirt inside the ceiling. Molds thrive in damp places. And when your ceiling has water deposits, it only attracts mold growth. When this happens, the molds can emit a musty smell coming from your ceiling. The mold growth is dangerous and is a health hazard in your house.

Can a Water Damaged Ceiling Be Fixed?

The good thing about a water damaged ceiling is that fixes are available. You don’t necessarily need to do a major home renovation as you can repair only the part of the ceiling with water damage in it. If you find your ceiling damaged due to water leaking, there are ways to repair them. Whether you choose to do it yourself or hire a professional, the ceiling that has water damage can still be patched with a new drywall installation.

How To Fix a Water Damaged Ceiling

Fixing a ceiling with water damage can be done by using a few tools and handyman skills. If you trust that you can repair yourself, you can easily patch new drywall and replace the part of the ceiling that has already been damaged by water. Here is a step-by-step procedure for water damage repair.

1. Find Out the Water Source

The first thing you have to do is to immediately find the cause of the water damage. Where is the leak coming from going to your ceiling? Identify the source of the water so that you can stop the leak before proceeding to do any repairs.

You can do this by checking the usual culprits of water leaks going through the ceiling. This can be due to plumbing fixture leaks, roofing problems, or appliances that are leaking water. Make sure to fix the leak first. By knowing where the water is coming from and fixing them, you can stop the leak once and for all.

Working on a ceiling is dangerous as it may fall due to water damage. What you need to do is to stabilize the area by removing any heavy fixtures like appliances or lighting installations.

The integrity of the ceiling structure is already compromised from the water leaking onto them. Having any heavy items can only weaken the ceiling. Worse, it could endanger the repair activity. Also, if the ceiling is already drooping or sagging, it’s best to provide support in the meantime.

3. Dry Out the Affected Parts

As the damage is caused by water, it’s important to remove the water from the surface. Dry out the part of the ceiling that has water damage in it.

Drying out the wet ceiling makes it easy to do the repairs. It will not affect the repair activity. This is especially important for ceilings with a large volume of water or already have mold growth. Use rags or a vacuum if possible to get rid of the water.

After drying out the water-damaged ceiling, it’s now time to remove the drywall. You will be replacing the drywall later on to patch the water damage.

Next comes the repair, in which you need to use a new piece of drywall and carefully replace the part of the ceiling that has been damaged with water. Have the piece of drywall ready according to the size of the water-damaged part that you will be replacing.

Mark the area of the new drywall piece. Then, push the insulation to go inside. You can now attach the new piece of drywall and use screws to tighten them. To complete the patching of the ceiling drywall, use fiber fuse drywall tape to put firmly in place the patched part.

The final step is priming and painting the ceiling. Make sure that you’re using the same color of paint for the repair to look seamless.

In this step, the primer and paint will be the finishing touches to cover up the repair. Carefully paint the ceiling and have a newspaper or other items on the floor to catch any dripping paint. Let the paint dry before you attach anything to the previously damaged ceiling – be it lighting fixtures or any items that you need to place near the newly fixed ceiling section.

When To Call a Professional for Water Damage Repair

Ceilings are heavy and are risky to work on if you plan to do a DIY repair. Especially in the case of extensive damages, it’s best to call a professional contractor. You can minimize the risk of injuries and make the ceiling repair more successful by trusting contractors with the skills and expertise.

Hiring a professional contractor is the right decision if your ceiling has mold growth from water damage or it’s drooping already and can fall at any time. Local contractors such as Classic Restoration have the necessary expertise and equipment that you otherwise wouldn’t have to repair the ceiling damage.

Classic Restoration will assess the ceiling damage to make sure that they conduct the proper repair method. The skilled and certified technicians from Classic Restoration are experts in water-damaged ceiling repair. Thus, ensuring that the water damage in your ceiling will have a thorough repair, fixing the damaged sections, and restoring the function and look of your ceiling.

GET AN ESTIMATE
What they say

Mike was amazing! He and his staff were responsive and very kind during a very difficult home damage crisis for my Family. He was extremely knowledgeable and gave great advice for our situation. We are so pleased with the whole job from start to finish and highly recommend Mike and his company!

Elizabeth Rogal • Customer
After we discovered that our hot water heater had leaked, Mike came right over to assess the damage and set up fans and dehumidifiers. He was knowledgeable, pleasant, and professional.

Paula Prentiss • Customer
Mike Miller came over to assess a moisture issue we have with our slab foundation. Our engineered hardwood floors were installled directly on the slab and there is so much moisture in three areas that the floor is literally rotting.

Kerry Tracy • Customer
Mike was very helpful and provided honest and free advice identifying my issue was related to ventilation.

Mike Liberatore • Customer
Mike from Classic Restoration worked diligently to get our concerns addressed. He delivered on all his promises. Thank you for such great service!

Mike Hibbert • Customer
Rebuild your property after damages from either water, fire, molds, or other biohazards.
CALL (727) 400-4720
GET AN ESTIMATE
Areas We Serve
Contact Us